Get Involved in Restoring Passenger Rail Between Oklahoma City and Tulsa! 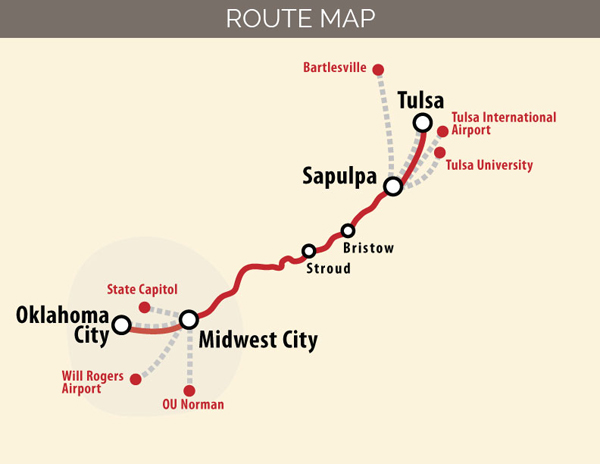 May 14, 1967 marked the last passenger train service between Oklahoma City and Tulsa, with the last run of the Frisco's Oklahoman. Four years later saw passenger train leave Tulsa entirely, when the Santa Fe's Tulsan was discontinued on May 1, 1971.

Today, we have the power to change that.

Oklahoma’s Transportation Commission is deliberating on the future of the Sooner Subdivision, a 97 mile rail corridor between Oklahoma City and Tulsa, and communities along the line are fighting to protect the right to develop a connecting passenger service. As NARP reported earlier, the Oklahoma City Council passed a resolution requesting that the state retain ownership of the railroad by a 9 to 0 vote. A nearly identical resolution was adopted by the city of Tulsa, the city of Sapulpa, and the city of Bristow this month. All were passed unanimously.

If that’s not a strong enough statement of endorsement, when Iowa Pacific ran three demonstration trains this month, they drew a crowd of over 900 passengers, selling out all three runs. The demand is there. The question is: will leaders in Oklahoma step up make the necessary investments?

Next Steps by the State

That question will be answered in large part by Oklahoma’s Transportation Commission.

The state bought the rail line from BNSF in 1998 for the purpose of preserving it for local shippers, while preserving the option to develop passenger rail service. The Stillwater shortline railroad took over operations and revitalized the line, which has grown steadily. Oklahoma receives 10 percent of gross revenues, which equaled $591,000 in 2013 alone. Right now, the Oklahoma Department of Commerce is conducting an economic impact and activity study to evaluate potential effects of the sale of the Sooner Subdivision.

Concurrently, five department heads at Oklahoman agencies—the Secretaries of Transportation, Finance, Commerce, Agriculture, and Energy—will have 90 days to prepare a recommendation to the Transportation Commission based on their review of the economic impact study.

At that point the Transportation Commission will make its decision.

What You Can Do

NARP has written to Governor Mary Fallin, along with the five department heads, to explain the potential benefits of this service. We've also notified local media about this month's important developments.

Encourage Governor Fallin to listen to the communities along the route who are fighting to preserve their right to mobility. The solution is within reach!