For California, “No Build” is Not an Option

CNN is at it again.

The latest entry in their series of anti-rail attack ads focuses on California’s statewide high speed rail project, which will connect the state’s biggest cities through 220 mph service.

In it, they found an unlikely ally in Quentin Kopp, one of the key architects of California’s high-speed rail project. Kopp is angry that the California High Speed Rail Authority has backed off from the construction of a planned four-track rail corridor into the Bay Area. Instead, CAHSRA will electrify Caltrain’s existing two-track rail corridor between Gilroy and San Francisco, creating a “blended system” capable of accommodating high speed trainsets in addition to commuter trains.

CNN fails to address the reasons this compromise was settled on. The blended system significantly reduces the cost of getting the system into service, and increases the likelihood that it actually will get built. In light of the disruption associated with creating a four-track corridor along the Peninsula, and the high cost of tunneling, the blended system emerged and allowed CAHSRA to reach an agreement with the Peninsula-area politicians who had been obstructing the project.

California High Speed Rail Blog’s Robert Cruikshank’s explains why Kopp is wrong in saying the blended system is a deal-breaker:

The blended plan is best viewed as a phase of HSR development. The first operating segment will be from Merced to the San Fernando Valley. From there the system will expand to connect downtown San Francisco to downtown Los Angeles, just as the Interstate Highway System began with isolated rural segments and used surface streets to connect segments until other freeways were built in the urban core.

NARP will work with elected officials and local advocates over the next decade to make sure the system is built out properly. But the time for delay is over and the people have spoken: we must build now.

No Build is Not an Option

The rest of CNN’s piece abandons substance for histrionics. Predictably, it focuses on the project’s price, citing the $12 billion spent nationally on the High Speed & Intercity Passenger Rail Program, $3.5 billion of which has been targeted at the California project. They also criticized that the entirety of the project’s $68 billion cost hasn’t been appropriated in full.

Let’s provide some context to those numbers.

In 2012, California had an annual GDP of $1.9 trillion, making it the ninth largest economy on planet Earth. The state has a large economy distributed over a large landmass powered by a large population, and it requires significant investment to accommodate its growth. Governor Jerry Brown’s proposed budget for this year includes $21.1 billion for major transportation programs, mostly targeted at roads and bridges. Even if you remove the high-speed rail line item, California is still spending $17.9 billion per year on transportation. If you extrapolate the non-HSR transportation budget over the next 17 years (which is how long construction of the high-speed rail system is projected to take), even assuming an ultra-conservative, no-growthpicture for the transportation budget, you discover that the state of California will spend $304.3 billion on surface transportation between now and 2030.

It is not enough to throw around “billions” as an argument for not taking action. “No build” is not an option. Whatever transportation project California comes up with to meet its population and economic will growth be expensive, and securing funding will be a multi-phase process. And that’s fine—as long as the project facilitates economic growth and the right kind of development.

Moreover, megaprojects are not, as a rule, fully paid for at the outset. The interstate highway system cost the federal government $600 billion over the past 60 years (not including user fees from the gas tax); that money wasn’t all identified in 1947 when the program was initiated. Funding challenges are not an excuse for the federal government to sit on the sideline—they are a reason for Washington to work with local governments to meet development goals.

California currently has a population of 38 million people, making it the most populous state in the union. The population is expected to soar to 50 million in 2049, and break the 52.7 million mark by 2060, according to population projections released this year by California’s Department of Finance (CDOF).

Faced with roads, airports, and trains that are already overused and overburdened, the state is struggling to accommodate this growth. Local leaders pushed for the high speed rail system as a cost-effective way to deal with a booming population. If you look at the map created by the CDOF, you can see that the growth is projected to take place in the Central Valley spine, ranging from the Bay Area to the Mexican border—almost exactly where the high speed corridor is located. 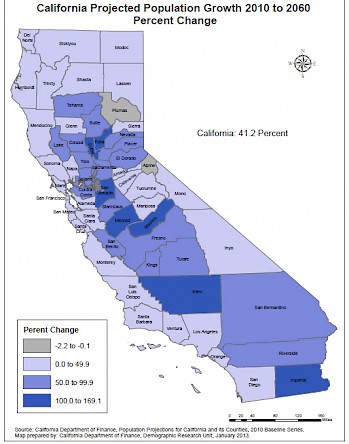 If the high speed rail plan were to be abandoned, you would need to build something else to take its place. Companies, ranging from small business owners to Silicon Valley-giants like Apple and Google, require mobility for their workers and goods. CAHSRA’s alternatives analysis found that, to get the capacity the high-speed rail system will provide, the state will need to spend as much as $171 billion for an additional 2,300 lane-miles of highways, four runways, and 115 airline gates. It is not enough to disagree with the idea of spending $68 billion on a high speed rail system. Any responsible participant in this debate must propose an alternative, provide a credible price tag, and make an argument that an alternative system will promote development of the kind of places people will want to live and work in.

But as CNN has proved—time and time and time again—they are not interested in being responsible. They are interested in stoking controversy for the ratings and the page views it brings. CNN faulted the High Speed & Intercity Passenger Rail program when it invested in conventional speed trains, and now they’re faulting the program for its ambitions in funding a 220 mph service.

Federal, state, and local leaders are moving this project forward. They are racking up victories over the naysayers and the NIMBYs, with the first contract approved on June 6 and a federal Surface Transportation Board ruling in their favor last week. And, as we reported in the NARP Hotline, this is good news for all of America’s passengers:

“The Authority should be applauded for attracting a diverse set of bids and selecting a consortium that's set to deliver cost savings of up to 18% below estimated costs, meet the standards of timeliness and independent utility that the Recovery Act demands, and create the backbone of the statewide high speed rail system in the Central Valley,” said NARP Council Representative Matt Melzer, leader of NARP’s Southwest Division. “Public stakeholders will expect strong oversight to ensure that the projected savings translate to real value in the form of quality construction using internationally-accepted best practices. California's proud history as an economic powerhouse in the past century has been driven by legacy of strong infrastructure. California High-Speed Rail will be a leading example for the United States of how to efficiently facilitate commerce and inter-regional mobility in the 21st century and beyond.”