Welcome to a periodic NARP Blog feature where we take a look back at the archives of our members-only newsletter, NARP News, which has been published eleven times a year since 1968. If you join NARP, you will receive NARP News either by email or postal mail. Today’s installment reviews a few stories from the 1990s that show that we were fighting the same battles nearly 20 years ago as we are now. 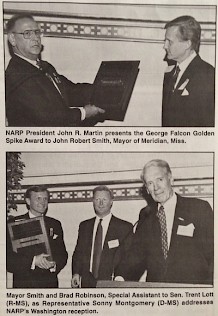 NARP presented our Golden Spike Award to John Robert Smith, then Mayor of Meridian, MS (R). He is now vice chairman at the national advocacy coalition Transportation for America (of which NARP is a member), and still testifying to the power of passenger train service to foster economic development in small to mid-sized cities and towns, even those (like Meridian) served by one train a day in each direction. Here’s part of what he said in his inspiring April 27, 1995 acceptance speech:

The effort which brings me here tonight is not to save the railroad’s past, as entertaining and captivating as that may be, but rather a commitment to the railroads of the future—a future where the people of our country enjoy access to an interrelated, intermodal passenger transportation system equal to our European and Asian competitors, a future where silver trains streak across the length and breadth of our nation in concert with national bus service, regional air service and our Interstate highway system.

At times, the obstacles faced in the fight for passenger rail’s future seem insurmountable, but as I walked through the coaches of the Crescent last night and looked into the faces of her passengers, I was heartened. School children, families, elderly couples, a cross-section of humanity that is America—they too, neet the promise of affordable mobility. They must not be cut off from the rest of their country and they are depending on us to be their voice and their hope. They deserve our best efforts. 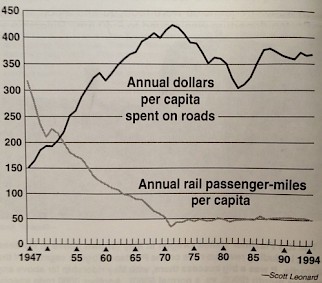 The very telling chart on the right, made by then-NARP Assistant Director Scott Leonard (who is now in Amtrak’s Government Affairs office), was accompanied by the following under the headline “Did trainsreally become merely passé?”

“People voting with their accelerator pedals…have really taken away from what had been the rail passenger [market],” sid one guest on a March 31 PBS television show on Amtrak. But is that how it really happened?

It’s more of a “chicken-and-egg” situation—which came first, passengers abandoning trains, or government building roads for them to drive on instead? At right is a chart drawn from the Federal Highway Administration and other sources. It shows a clear, inverse relation between highway spending (all levels of government, adjusted for inflation) and passenger train use (intercity and commuter).

As public-sector road spending (per capita) climbed from 1947 to 1970—surprise!—private-sector passenger train traffic (per capita) declined. As road spending leveled off after 1970, and as government began also to partially support trains, the decline in rail traffic was halted (and traffic rose a little).

Finally, a sad historical note. Train advocates, along with many at Amtrak, wish that the company had been able to keep and refurbish this equipment—particularly dome cars, given how much mileage and publicity Amtrak has to milk out of its sole remaining dome—instead of selling it. Luckily for the fortunate few who get to ride them, private owners bought many of these cars and keep them operable as charters attached to Amtrak trains or as special trains.