An occasional feature looking at the archives of NARP's monthly newsletter, available to NARP members and published continuously since 1968.

December 1987: NARP writes a speech calling for an increased gas tax as a “Christmas present for President Reagan” or his successor. “Our legacy to future generations must include a lifestyle that can be sustained—not one that would have to be altered dramatically by entirely predictable events,” we ghostwrote for the President. “For years, transit users have endured fare increases and service reductions while watching gasoline prices fall and hearing public officials attack transit subsidies,” we continued. “But transit users, and those state and local governments who support transit, help all of us. … Low gasoline consumption rates in transit-oriented cities mean more gasoline at lower prices for the entire nation!”

June 1989: File under missed opportunities: Reauthorization of the federal Clean Air Act that year could have emphasized “reduced auto use and increased reliance on mass transit and transit-supportive land use planning.” Yet then-President George H.W. Bush’s clean air plan only called for individual cars to emit fewer pollutants, not for the still-needed shift away from car overdependence. The cartoon below by Tom Toles (now with the Washington Post) says it all. Many clean air advocates at that point were calling for increasing transit use to be an integral component of the federal strategy to reduce air pollution. While some progress has been made since then (such as the Congestion Mitigation and Air Quality program for which passenger train and rail transit projects are eligible), the connection between our travel choices and the air we breathe still hasn’t been fully ingrained in public policy. 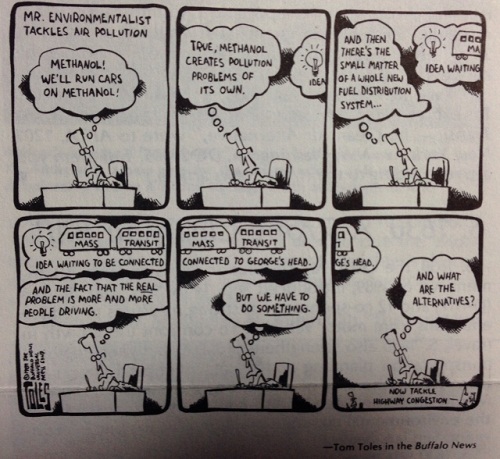 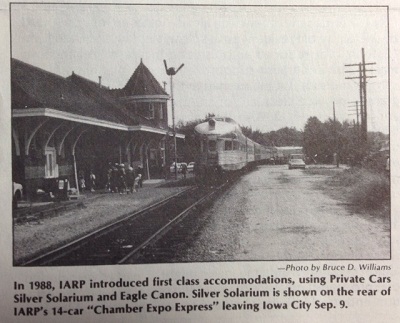 Also from June 1989: The Iowa Association of Railroad Passengers (IARP) at that time cooperated with sports teams and convention promoters in the state to operate special passenger trains over Iowa Interstate Railroad (ex-Rock Island) lines, like the one pictured leaving Iowa City on Sept. 9, 1988 with luxury private cars on the rear (see photo). The Executive Vice President of IAIS, which is owned by long-time NARP member Henry Posner, III, at the time said “Part of being a good corporate neighbor, as far as interaction with the public is concerned, is the operation of passenger trains for excursion purposes.” It would be nice if more railroads had that attitude.

September 1985 (the month I was born): The Amtrak Board agreed to keep running the Washington-Montreal Montrealer (on what’s now the route of the Vermonter) north of St. Albans for at least 6 months while its performance was further evaluated, rather than replacing the St. Albans-Montreal portion with a bus. NARP pointed out in a statement to Amtrak that the company missed an opportunity to sell its low “All Aboard America fares”—such as $75 one-way from Montreal to Miami or New Orleans—to Canadians. The train ran through to Montreal until 1995, when it was cut back to St. Albans. Restoring it to Montreal remains one of NARP’s goals.

July 1986: Amtrak introduces “Railfone,” on-board public pay phones on New York-Washington Metroliners (predecessors to today’s Acela whose equipment, designed in the 1960s, is the model for the still-ubiquitous Amfleet). How times have changed: 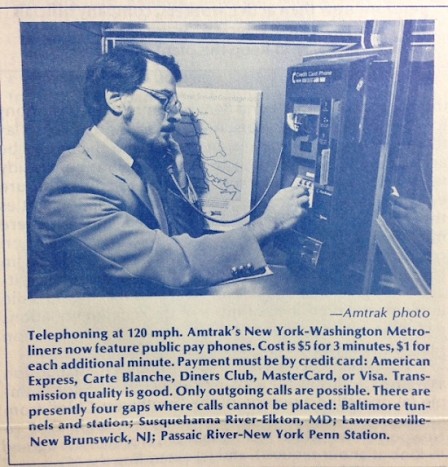