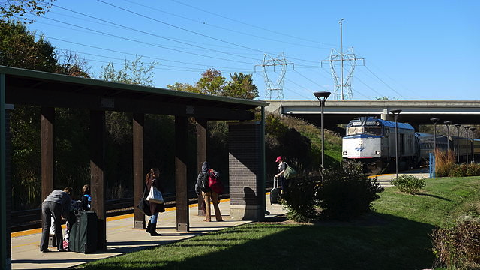 One of Amtrak's Hiawatha Services stops at Milwaukee Airport station. Licensed through the Wikimedia Foundation.

Much like railroads in the 1950s and 1960s, today’s airlines are consumed by merger mania. Faced with record fuel prices, increasing overhead costs, and declining revenues, America’s big airlines continue to look towards merger as a means of reversing losses. This trend can be seen through the declining number of “legacy carriers”, a term used to define airlines operating before deregulation in 1978. From a high of 14 carriers in 1978, there remain only six today.

Assuming the proposed merger of US Airways and American Airlines goes ahead, there will only be five. The Department of Justicerecently reversed its decision to block the merger on anti-trust grounds, following a multi-billion dollar settlement with the two airlines. However, the terms of the settlement are bad news for the average traveller.

Why? The newly merged airline will be obliged to terminate many of their “slots” at Washington’s Reagan National Airport and New York’s Laguardia Airport. These slots are what allow the airlines to schedule flight arrivals and departures; negotiation over slots tends to be the largest part of controversies over mergers and other service expansions. By releasing a substantial portion of their spaces to bids from other airlines, regulators believe competition will increase and so afford consumers more choices.

Unfortunately, the reverse is true. Invariably, new slots are opened at the expense of existing flights to smaller, midsize airports. As Jack Nicas explains in his Wall Street Journal article, cities such as Louisville, Raleigh, and Nashville can expect to lose service. Even larger markets such as Indianapolis and Kansas City could lose their non-stop flights from New York and Washington, a telling sign of the broader decrease in service.

But this trend is nothing new. Since 2002, the airlines have cut 26% of their flights to nation’s 35 midsize airports, including cities such as Portland, Providence, Milwaukee, Buffalo, and San Antonio. Over the same period, they’ve increased fares by 12% over base inflation. Even in cases where service remains, many direct flights have ended; obliging customers to spend long overlays at hubs hundreds of miles away from their final destination. Travellers from mid-sized airports thus have to pay more in time and money to complete their journeys- if they can find flights at all.

Passenger rail can effectively and efficiently serve smaller markets. Amtrak’s mandate is to create a national passenger rail network that serves as many communities as possible, a reality reflected in the composition of the current long-distance network. As NARP has long argued, long-distance trains are not an outdated means of coast-to-coast travel; they are instead modern mobility machines that connect smaller communities to the rest of the country. It’s not a question of subsidizing trips from Chicago to Los Angeles; it’s a matter of ensuring that people in Dodge City, La Junta, and Needles have access to affordable public transportation.

In the coming weeks, Congress will consider the reauthorization of the landmark 2009 Passenger Rail Investment and Improvement Act, which has been responsible for tremendous gains in on-time performance and investment in expanded services. Chief among NARP’s hopes for the reauthorization is a commitment to ensuring that 80% of Americans are within 20-25 miles of a regularly-served Amtrak station within twenty-five years. NARP believes that this is not only a feasible goal, but necessary for sustained economic growth.

When the airports shutter their doors, passenger trains will be needed more than ever. Otherwise, millions of Americans will be left stranded.