Europe Is Committed to Developing its Railways Even Further

This blog post was written by NARP intern Karl Haljasmets, who is European (Estonian) himself.

Quick facts about trains in Europe:

· Rail carries about 10% of all freight traffic across Europe, with estimated revenue of €13 billion (about $17,7 billion).

· 6% of Europe's passenger journeys are by rail annually. That's 8 billion people who are not adding to city traffic jams or heavily congested roads.

· The average lifetime of a plane is around 30 years, of ships around 28 years and train rolling stock is replaced approximately every 35 years.

In most of the developed countries, trains and railways have become an essential part of daily life. Looking at different regions, Europe has the most developed railway network in the world. If you look at the Eurail railway map, you’ll see that in Europe it is possible to get almost everywhere by train. This is the reason why 120,000 global travelers buy a Eurail Global Pass every year that costs a minimum of $623 USD. With this pass, they can reach all the states on the map. Moreover, the railway map at the header does not show the numerous smaller railway connections that are available in Europe. Those would connect across the entire map.

With more than 8 billion passenger journeys made by rail each year in Europe, trains are an essential part of the transportation system. Like the University of Missouri Eurokulture blog acknowledges, the Europeans have a kind of love affair with trains. In a sense, it is no wonder because trains have always been and still are an essential part of the European transportation network. When looking back historically, Britain was a pioneer of train travel and the first public railway between Stockton and Darlington had already opened in 1825. Because railways were essential for delivering goods in Europe, it meant that the railway network developed rapidly and soon covered the whole continent.

The commitment of developing railroads has still not lost its importance, and Europe continues to show its devotion to the development of railways. According to the European Commission, rail is vital in the European Union transportation system and plays a key role in addressing issues like air pollution and rising traffic demand. The European Union’s commitment to developing the railway sector is best characterized by the example of rail development projects around the world. There Europe leads the way with 259 projects, leaving Asia with its 126 projects far behind. The United States with its 82 projects is situated at the third place but still lags behind other developed regions.

One of the biggest projects now in the EU is the Rail Baltica. Looking back at the Eurail railway network, it is apparent that the Baltic States (Estonia, Latvia and Lithuania) are not connected with the rest of Europe’s railway network. This project will try to fill this gap. According to The Economist, the estimated cost for the project is $5 billion and the union will cover 85% of it. This route should also bring opportunities to shift the freight transport from roads to rail and attract investments. Because of the low traffic, however, the economic viability of the route is questionable. Still, after many years of negotiations, the Baltic States’ Prime Ministers signed an agreement onRail Baltica joint venture and thus it should only be a matter of time before the project enters its final phase. 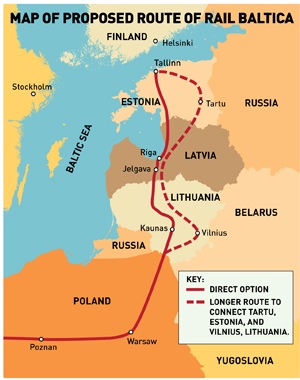 The proposed route of Rail Baltica

The European Railway sector still has its own set of problems

Although the commitment of the European countries to trains is high, the continent has its own set of problems. Interestingly, many rail markets are at the moment facing stagnation or decline. The main problem of the European railway sector is that it is fragmented into national markets that have many different rules and procedures. Just imagine 28 different member states and countries that border the EU with different languages, legal environments, service providers and rails that have different profiles. Establishing harmony between them and making the system effective is in no regards an easy task. This is one of the main reasons why only 6% of Europe's passenger journeys are made by rail annually despite Europe’s extensive railway network.

Despite these challenges, an agreement on the Technical Pillar of the Fourth Railway Package was reached this June. The goals of the reforms are to cut the administrative costs of rail companies and allow other operators to enter the market. This reform again alludes to the immense difficulties caused by the different railways systems of the member states. On the other hand, the agreement tries to create the necessary competition among railway providers to lower prices. The reform, generally speaking, means that the member states will not issue vehicle authorizations and safety certificates, but this will be the job of the European Rail Agency. According to theEuropean Railroad Agency, this should lead to €500 million savings ($682 million) for companies by 2025.

Additionally, the European Union has tripled its funding for rail innovation with a new project called "Shift2Rail", which is a public-private partnership where about €1 billion (about $1.36 billion) is invested into innovation and research with the goal of getting more passengers and freight onto railways. According to the European Commission, this will, in practice, concentrate on five focus areas: developing a new generation of high capacity trains, transforming the traffic management process to be more effective, improving the quality of the tracks, linking train traffic to other forms of transportation and developing a unified ticketing system. 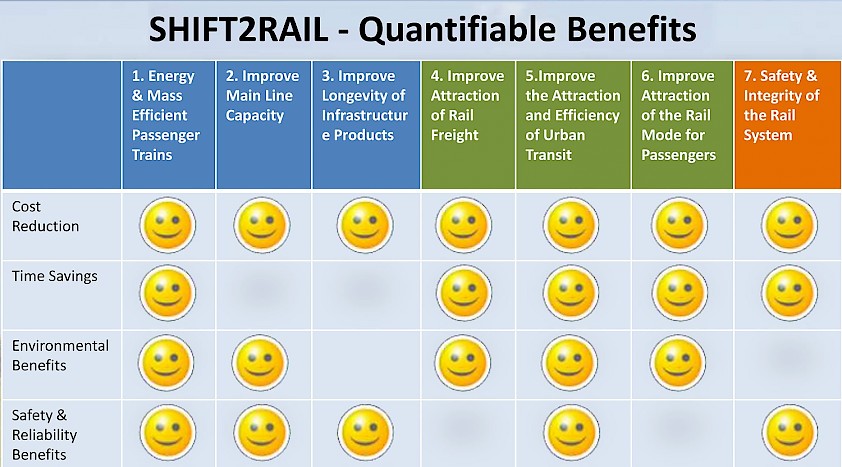 The quantifiable benefits of Shift2Rail

Moreover, this is one of the many railway projects that the European Union is implementing. The European Union’s policy towards railroads is best described in the words of Antoni Tavani, the Vice-President of the European Commission: “The European Union is pursuing an active and balanced policy which aims to provide citizens with a quality rail transport service, to improve the management of rail infrastructure, to encourage the development and use of new technologies to build a modern and competitive rail network, and to make rail transport a privileged instrument for European integration.”

NARP applauds the continuing advancements of train travel in Europe and hopes the same standards can someday be achieved for train passengers in the United States.