Since its opening in 1908, the Beech Grove Shops have been a major locomotive and passenger car maintenance facility for all of their owners. From its beginnings with the Cleveland, Chicago, Cincinnati and St. Louis Railroad (the “Big Four”) tending to steam locomotives and wooden passenger cars, to its current configuration as a repair shop for Amtrak’s latest diesel-electrics and stainless steel passenger cars, Beech Grove Shops remains a name well known in American railroading. 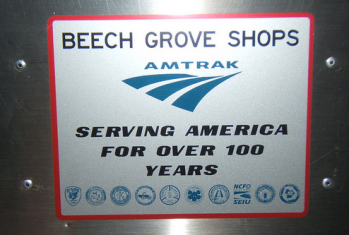 As they were a century ago, the shops remain a major employer in the town. More than 550 workers are employed at the facility, collectively earning more than $30 million in income every year. Following the boom in Amtrak ridership, the facilities have been busier than ever. Ricky Burton, the shops’ assistant superintendent, noted that more than 100 new employees have been brought on in just the past year. And these jobs are not the low-paying service positions that have characterized most jobs created during the economic recovery. With a starting wage of $28 an hour, few places in the state can compete with the high wages.

Unfortunately for the facility and its employees, its future may be in doubt. As NARP hasreported on for the past several weeks, the Indiana Department of Transportation is considering terminating the four-times-weekly Hoosier State between Indianapolis and Chicago. While the consequences for passengers living along the route are clear, less attention has been given to theHoosier State’s place in Amtrak’s larger operations.

The Post-Tribune of Northwest Indiana’s Matt Micus identified the Hoosier State as the primary means for bringing cars from Amtrak’s Western routes in for service. Just as cars in need of repair in the east are attached to the Cardinal from New York on its way to Chicago, cars from the west join the Hoosier State’s consist at Chicago to make the trip to Beech Grove. It should also be said that Beech Grove’s position as Amtrak’s main passenger car repair facility was part of the reason for the Hoosier State’s restoration in 1998. Without service between Chicago and Indianapolis, Amtrak had to run unscheduled trains to Beech Grove: a move that cost the railroad precious time, money, and equipment.

While Amtrak has given tentative assurances that the shops will remain open even if the Hoosier State is ended, the railroad’s uncertain funding situation means that the facility is still in danger. Given the sheer number of anti-rail amendments proposed that would have defunded Amtrak, as well as the drastic cuts proposed in the most recent House appropriations bill, the railroad can only operate within a limited fiscal environment. In the event that the Hoosier State were discontinued, Amtrak may find it prohibitively expensive to repair cars at Beech Grove. An Amtrak spokesman acknowledged this, stating it would be “extremely difficult to compete for bids” without the constant service guaranteed by theHoosier State.

NARP has been at the forefront of the fight to defend Hoosiers’ right to more travel choices. Our President and CEO Ross Capon recently wroteto Governor Mike Pence supporting the Hoosier State’s continuation, and we have urged our members to make their voices heard.