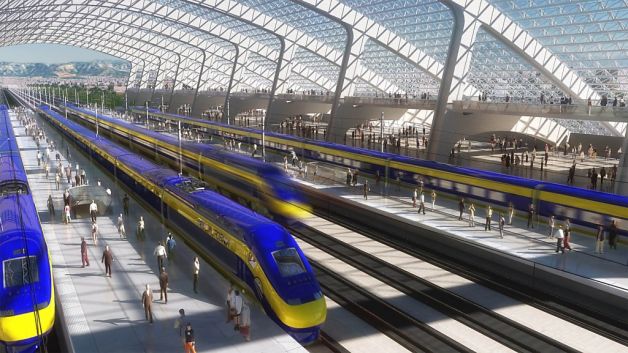 Governor Jerry Brown sent a big message of support for passenger rail with today’s state budget announcement, identifying $300 million for rail modernization. And it’s encouraging for more than just the state’s 220 mph high speed rail project. The Governor’s budget will benefit passengers who rely on Amtrak California, commuter trains, and light rail. Critically, that means Californians won’t have to wait 10 years or more to see the fruits of this investment—something that’s sure to build public support for future funding.

It has been rumored for months that Governor Brown might look to revenue from a cap and trade system to fund high speed rail. The logic is obvious: you want to use the funds from companies creating harmful emissions dirtying our air and polluting our environment to help reduce future emissions. And what better way than providing a transportation choice that allows people reduce their dependence on oil-burning planes and cars, and choose energy-efficient trains that run on electricity?

So it wasn’t a complete surprise that the Governor’s budget includes $250 million for high-speed rail. That is an impressive figure that puts the infrastructure ambition of the U.S. Congress to shame. The additional $50 million for other passenger operators will be a pleasant surprise for detractors of the project who have argued that the money would be better spent on conventional rail infrastructure.

As part of the plan, the California Air Resources Board called for “the further development of the statewide rail modernization program, [which] will better integrate existing passenger rail and transit service with the future high-speed rail system, and act as an additional catalyst for transit-oriented and sustainable communities development.”

Governor Brown recognizes that a modern rail system—high-speed and conventional-speed—will be necessary for a prosperous Californian future. California will add 12 million new residents in the next 30 years. To add enough non-rail capacity to meet that demand, the state would need to spend roughly $150 billion to build 4,300 new-lanes miles of highway, 115 additional gates at California airports, and 4 new airport runways. By building acomprehensive rail system instead, California will create a cleaner, more efficient transportation network—one that will improve economic competitiveness for the state’s businesses and create more livable neighborhoods.

Governor Brown has been smart enough to reject the either/or choice being pushed by the project's opponents, who say that the U.S. isn’t currently capable of building big things. A truly modern rail system—one that shows the public what a world-class train experience is like—is the only way to ensure that trains realize their full potential to improve America’s mobility, prosperity and quality of life in the years ahead.