Building Up the Steel Interstate 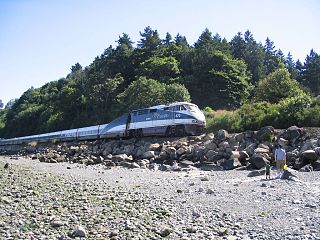 Amtrak's Cascades outside of Seattle, WA. Licensed through Wikimedia Foundation.

Our readers know that the major hallmark of U.S. passenger rail operations is that, in most places, Amtrak’s passenger trains run on track owned by the private freight railroads. This arrangement unfortunately can cause significant delays for Amtrak passenger as well as logistical difficulties for the freight railroads. To remedy this, the 2009 American Recovery and Reinvestment Act appropriated $10.1 billion as part of the High Speed Intercity Passenger Rail initiative (which we’ve mapped) for improvements to track infrastructure. But as Curtis Tate observed in a recent article, these improvements don’t benefit passenger rail exclusively. Rather, they benefit freight and passenger operations and thus improve total system performance.

Let’s look at the example Tate cites in Washington State. Amtrak’s Cascades services, which run from Vancouver, British Columbia to Portland, Oregon, primarily runs on track owned by the Burlington Northern Santa Fe (BNSF). To improve service times and allow for additional services to be added, Washington State applied for and received more than $781 million in funds for improvements on the line. These improvements, including extended passing sidings, track upgrades to allow for higher running speeds, and anti-landslide measures, will ensure that passengers on the Cascades don’t experience delays and can complete their journeys quicker than ever before.

But there will also be substantial benefits for BNSF’s freight trains. By not having to share tracks with passenger trains on as many portions of the line, slower freights will be able to proceed without needing to be delayed, ensuring that schedules are more closely adhered to. The same can be said for improved track quality: fewer slow orders and higher overall operating speeds will mean that freight can reach its destination even quicker than before. Matt Rose, BNSF’s CEO and Chairman, applauded the federal government’s investment, calling it an “important step” towards meeting “future demands for both passenger and freight rail service.”

Unfortunately, the use of HSIPR money for improvements on mixed freight/passenger lines hasn’t been without its detractors. In a 2009 article criticizing the program, Ronald Utt of the Heritage Foundation argued that HSIPR funds essentially subsidize freight railroads and only “indirectly benefit” Amtrak services. Utt argues that the $10.1 billion invested in the program was not a “productive” use of taxpayer funds, given his contention that it’s a subsidy to private industry.

But singling out HSIPR as an example of government subsidy ignores the fact that all modes of transportation are subsidized in one way or another. No purely privately financed, owned, and operated form of transportation has existed, exists now, or ever will exist anywhere in the world. Whether through favorable local or national property laws, direct subsidy, or even outright ownership, all modes are in some way or another subsidized by the government. In just the past five years, more than $53 billion has been transferred by Congress to bail out the ailing Highway Trust Fund. And, of course, more than $5 billion of the TSA’s annual $7.6 billion budget comes from federal appropriations as well, representing a huge subsidy of the airline industry’s security costs.

NARP believes that federal transportation policy must treat rail on an equal basis with aviation and highways. That’s why we’re a proud member of the Steel Interstate Coalition, which advocates for a partnership between all levels of government and private industry to improve freight and passenger rail service. While the long term goal is for the creation of an electrified high speed network, the Coalition advocates in the short term for an overall increase public investment in the nation’s rail network.

Our railroads are truly a “Steel Interstate” upon which our economic future travels. Just as the Interstate Highway System revolutionized American life in the middle of the 20th century, so too can the Steel Interstate in the beginning of the 21st. All we need now is the political will to make it happen.