Bottlenecked: Amtrak Cannot Become a Victim of Its Own Success

Rumblings of a coming capacity constraint on the Northeast Corridor connote unpleasant implications for the rest of the system.

Amtrak has a habit of basing what long-term planning it does on very conservative estimates of ridership growth. This is done to prevent Amtrak’s critics from accusing the railroad of overestimating the number of people who will turn to trains for their travel needs. But it risks becoming a self-fulfilling prophecy. For medium-term budgeting purposes, Amtrak seems to assume ridership increases of 1.5%/yr on most routes. For fleet planning purposes (i.e. in the Fleet Strategy Plan), they assume 2% per year. Even trotting out these relatively lowball numbers (I will explain why I find them to be low momentarily), a capacity crunch seems to be on the horizon for the the Northeast Corridor (NEC) in the next few years. Given the lack of support on Capitol Hill for doing much beyond maintaining existing service levels, Amtrak sets itself up for a situation of perpetually lacking enough seats on the Corridor for the number who want to ride. This leads it to turn away hundreds of potential riders in the nation’s busiest travel market either through sold-out trains or the high fares that accompany them. This trend may worsen: 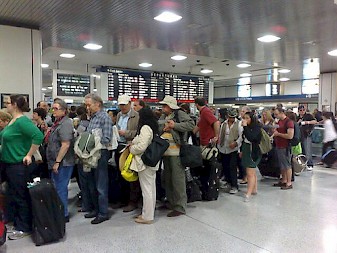 In 2012, ridership on the Northeast Regionals within the NEC Spine (Washington-Boston) was 8,014,175. Adding in the Regional ridership originating in Virginia, we arrive at 8,822,946. Subjecting these totals to compound interest outlines the issues facing Amtrak:

This makes Amtrak’s need for additional cars and locomotives glaringly obvious—and this doesn’t even include the new and expanded services outside the NEC that NARP is pushing for. Amtrak will need somewhere between 100 and 150 new cars for the NEC alone. Among things Amtrak should consider to put more seats into service are:

An additional flaw in Amtrak’s strategy for the NEC is that it places the majority of ridership growth onto either Acela Express or a next-generation high-speed service. As long as these continue to be priced and marketed as premium services, they will remain out or reach for large segments of the population, particularly students, low-wage workers and entry-level professionals, and those on fixed incomes. Amtrak’s popularity has grown amongst younger people, but with so many of them being priced out of NEC services, the next generation of leaders is coming away with a less favorable impression of the company. For the time being, they are not the target audience for Acela or a premium next-generation high-speed train. That being said, the number of premium service seat miles is constant to what it was 25 year ago, and less than were offered 15 years ago. The attractive revenue generator that it is, expanded options, differentiation, and capacity for premium service certainly needs to remain as a focus. It is simply a mistake to make it the primary concentration of the program.

In the meantime, NARP members need to hammer home the point that Amtrak is doing incredibly well in a political environment that, at best, is not conducive to long-term planning, and, at worst, is downright hostile to the concept of a successful, national passenger train network. It is up to us advocates to convince legislators and Amtrak management not to let this critical moment in American passenger train history pass it by, but instead to grab the bull by the horns and make the plans and press for the resources necessary to take advantage of the tremendous growth potential that presents itself—not just in the next-generation HSR department, and above all, not just on the Northeast Corridor!

-- By NARP Member Cliff Dunn, with assistance from Malcolm Kenton and J. A. Zumwalt