Against a backdrop of unprecedented ridership, constrained capacity, and operational challenges, Amtrak's national network of the 15 long-distance routes recently came under the aegis of Mark Murphy, Amtrak's new General Manager Long Distance Services. The reorganized business line is now largely overseen by a cadre of Amtrak veterans such as Murphy, who graciously presented to the joint NARP and RailPAC (Rail Passenger Association of California) “Steel Wheels” member meeting in Los Angeles on February 1.

Alongside his experienced deputies Joy Smith (Business Liaison Director of Service Excellence) and Mike Dwyer (Route Director for the Coast Starlight andSouthwest Chief), Murphy outlined an optimistic vision for the national network trains whose sense of security has ebbed and flowed with the political winds and Amtrak's finances over the years. With diminished debt, record ridership for 10 of the last 11 fiscal years, and a record 89% operating ratio (89 cents in fares recovered for every dollar of expenses), Amtrak is the strongest it has been in modern times – albeit below its historical high water-marks of route breadth and fleet size. 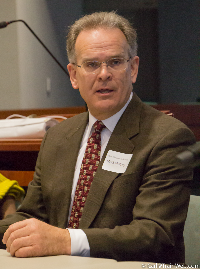 The long-distance trains are the linchpin of this success, accounting for 44 percent of all Amtrak passenger-miles (actual transportation output). They punch far above their weight considering that they carry only about 16% of total system passengers. The average trip length is 600 miles, and 23 states have no other form of intercity passenger trains (many communities also have little in the way of air or bus service). Murphy articulated a tripod strategy to build on this success, focusing on Financial Excellence (further improving the operating ratio), Safety and Security (forging industry-leading safety standards), and Customer Focus (“to acquire and retain the most satisfied customers of any travel company in the world”).