ACTION ALERT: Passengers Seize the Momentum in the Senate

The Senate Appropriations THUD Committee released its transportation budget this morning and thanks to YOUR calls we saw a positive change in funding for rail and transit:

Significantly, all three passenger rail grant programs created by the FAST Act received funding -- a testament to the work being done by advocates like you! 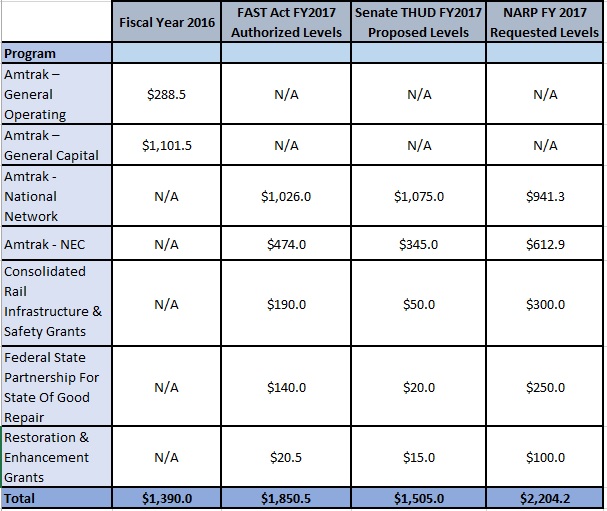 [The Senate THUD FY2017 Proposed Levels bill summary identified $334 million for Rail Safety & Research Programs, not completely accounted for in this table; the total funding level identified by the Committee is $1.7 billion.]

If you called your Senator in support of this bill, please take a moment to thank them. If your Senator is on the Appropriations Committee (full list included below), then your call is even more important: the full Senate Appropriations Committee is scheduled to markup the THUD bill on April 21st. At this hearing, individual amendments will be permitted, so there's a chance we could push investment in trains even higher!

Thank you for your action,
Jim Mathews | President & CEO | NARP